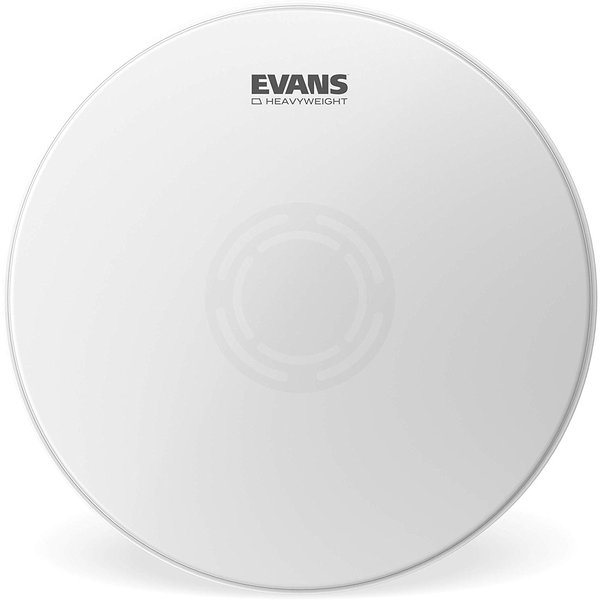 Evans Heavyweight snare heads feature two plies of film. The combination of two identical plies of 10mil film provides maximum durability and a compressed attack while maintaining a wide dynamic range. The Reverse Dot lends extra durability, focus and attack in the center.  Evans Level 360 technology is incorporated to extend the level playing surface of the drumhead, 360 degrees around the drum. The vertically enhanced collar design guarantees even contact with the critical bearing edge of the drum shell, resulting in: ease of tuning, extended pitch range and optimum quality of sound. Evans Level 360 technology resolves the age-old dilemma of traditional synthetic heads consistently not fitting the drum shell without using considerable force.

Introducing Level 360 — the revolutionary new drumhead technology that's staking a claim for the freedom of drummers everywhere. Freedom to spend more time playing not tuning, jamming not cramming, and expressing themselves with tonal range like never before. From here on out, Evans drumheads will be leading the charge across the board into a new era of innovation & superior performance all-around — 360 degrees to be exact.

For over 40 years, Evans has been a pioneer of drum head manufacturing and design. Known for innovative designs such as EMAD, EC2S, and the Hydraulic series, Evans drum heads are made in the USA in a state of the art manufacturing facility. Acquired in 1996 by D’Addario and Company, the global leader in musical instrument accessories, the Evans brand is synonymous with quality and consistency.

condition:new (6323)
Please accept cookies to help us improve this website Is this OK? Yes No More on cookies »
© Copyright 2022 Graham Russell Drums - Theme by Frontlabel - Powered by Lightspeed