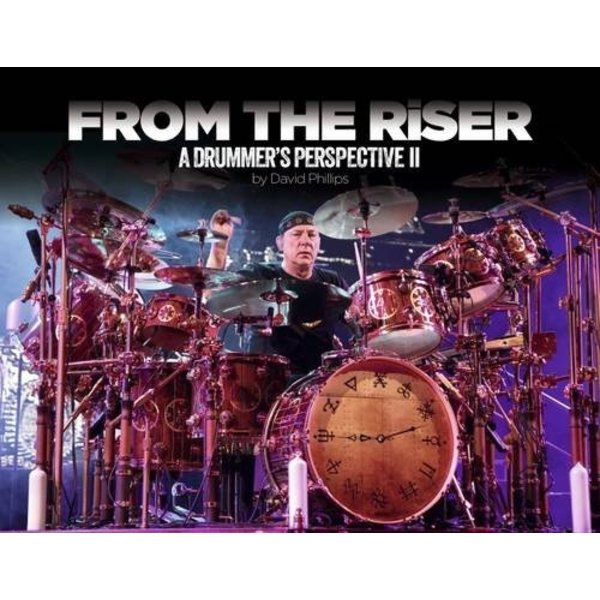 Read or write a review

0 Review(s)
£29.95 In stock
Buy a new A Drummer’s Perspective II Book from Graham Russell Drums. Next day delivery when you order before 2pm! Read more

From The Riser: A Drummer’s Perspective II, is a follow up to the critically acclaimed A Drummer’s Perspective. The beautifully designed, From The Riser is a photographic celebration of many of today’s greatest drummers and percussionists. It unashamedly captures the energy, emotion and elegance of the world’s best, playing with the world’s greatest bands. The book features two hundred and seventy previously unseen photographs taken exclusively by the author. It includes over one hundred and thirty legendary drummers from a wide range of genres including Taylor Hawkins (Foo Fighters), Sheila E (Prince), Tommy Lee (Mötley Crüe), Derrick Wright (Adele), Dame Evelyn Glennie, Jack DeJohnette (Miles Davies), Travis Barker (Blink-182), Vijay Mistry (Kaiser Chiefs), Venzella Joy Williams (Beyoncé), Jonathan Moffett (Michael Jackson), Roger Taylor (Queen), Lars Ulrich (Metallica) and Stewart Copeland (The Police). Included alongside the many striking images is a record of Phillips’ cherished collection of backstage passes, set lists and other memorabilia. Rush’s Neil Peart penned the foreword for the book Phillips is an intuitive photographer who, as a drummer himself, demonstrates a natural affinity with his subjects particularly when working in a live environment. Capturing portraits of drummers has become second nature to him and his work in Artists Relations provides extraordinary contact with an incredible range of musicians and bands. This ambitious book, with over one hundred and eighty pages, is a lavish tribute to drumming and drummers, which reflects Phillip’s intuitive knowledge and deep respect of all things percussion. It is a complete compendium, packed with expressive, jaw-dropping photos.

condition:new (6327)
Please accept cookies to help us improve this website Is this OK? Yes No More on cookies »
© Copyright 2022 Graham Russell Drums - Theme by Frontlabel - Powered by Lightspeed